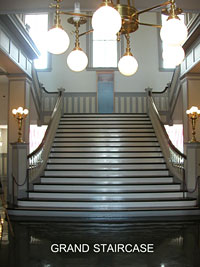 Friendly staff greet visitors to the Florida Historic Capitol Museum at the reception desk, where they will learn about the history of the building as well as upcoming events and exhibits. This historic site and museum has two floors of exhibits and restored areas focusing on Florida's political history. Originally completed in 1845, the building is restored to its 1902 appearance, including the grand staircase designed by architect Frank Milburn to impress first-time visitors.

A small gift shop is adjacent to the First Floor Rotunda. A portion of the sales from items featuring the art-glass dome benefits the Historic Capitol Museum. 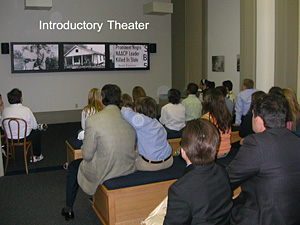 In the Historic Capitol Theater, view the award-winning eight-minute documentary Florida in the Balance. While highlighting the rich and unique heritage of Florida, the film explains how state government and its leaders serve citizens through programs designed to meet their diverse needs and interests. 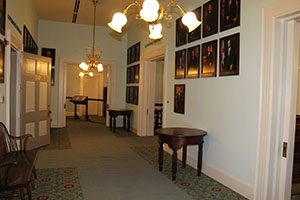 110A Reception Room to the Governor's Suite

Restored to its 1902 appearance as the reception room to the governorגs suite, this space features period and reproduction furnishings. A gallery of reproduction Florida governorגs portraits is also on display. 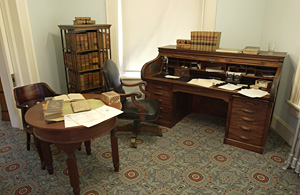 The roll top desk, made of Honduras mahogany, is Jennings' original desk. William Sherman Jennings served as Florida's governor from 1901 to 1905. His wife, May Mann Jennings, once called גthe governorגs right hand manג, assisted him. Together they brought about many reforms in education, labor, and conservation. 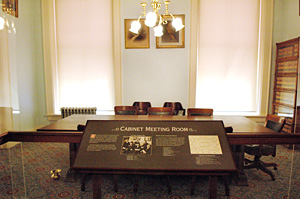 The governor and the cabinet once used this original table for meetings. Other items include steam radiators, tobacco spittoons, law bookcases and the Fleming collection of early governor's portraits dating from 1889. 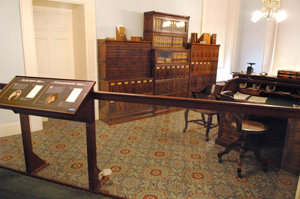 The large document file cabinet was in the room after 1902 and is almost completely original. Some of the original labels can still be seen, including “W. S. Jennings Private” and “Bank Pardons.” 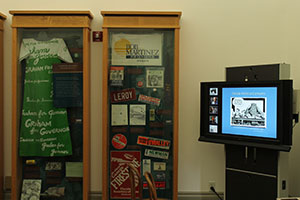 This room was the original Governor's Office from 1845 until 1902. Today, you will find memorabilia, artifacts, and photos related to inaugurations, the Office of the Governor, and campaigning, including Lawton Chilesג boots from his 1970 US Senate campaign. He walked 1,033 miles from Floridaגs panhandle to the Keys. 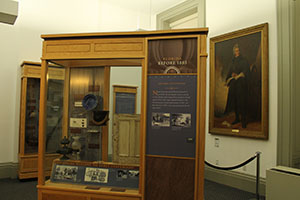 Florida has had many forms of government each reflecting the people who lived here. Learn how this land was governed by Native Americans, as a Spanish and British colony, as a US territory, and then as the 27th state of the Union. Artifacts representing Florida's past include pre-contact Native American tools and pottery, Civil War-era muskets, and an authentic carpet bag. 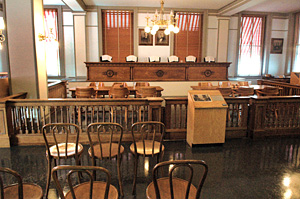 The Supreme Court of Florida met in this courtroom from 1903 until 1913 when they relocated to their own building. Based on a 1911 photograph, the restoration includes many original furnishings: the twenty-four foot long bench, made of golden oak at a cost of $350 in 1902; both of the attorney's tables; most of the railing; and the portraits on the walls. 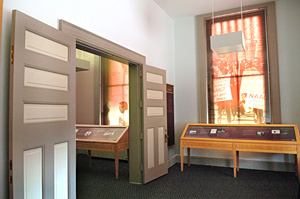 In this space, visitors can also learn about the process of becoming a Florida Supreme Court Justice. 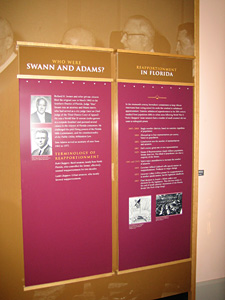 In the 1960s, Florida was known as the most malapportioned state of the United States. About 13 percent of Florida voters could elect 50 percent of the State Senate. Less populated rural counties in Florida had more senators than counties with larger populations.

A coalition of northern Senators, nicknamed the “Pork-Chop Gang” had effective control of the Florida Senate and successfully resisted apportionment reform. Then in 1962, a U.S. Supreme Court ruling changed everything. Swann v. Adams tells the story of how Floridians achieved “one person, one vote.” 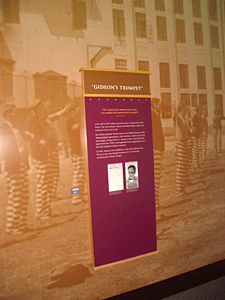 This exhibit tells the story of how impoverished Florida man Clarence Gideon changed the entire legal system in the United States in the 1960s. Based on the Gideon v. Wainwright case that reached the United States Supreme Court, individuals now have the right to a court-appointed attorney.

After November 7, 2000, Florida stood at the epicenter of a battle for the Presidency of the United States that riveted the world's attention for thirty-six days. Surrounded by television trucks, the Historic Capitol was a common backdrop for news broadcasts from Tallahassee during the controversy. Decisions from the Florida Supreme Court and United States Supreme Court played a crucial role in the outcome. Placards, newspapers, T-shirts, and a butterfly ballot from the election are on display. 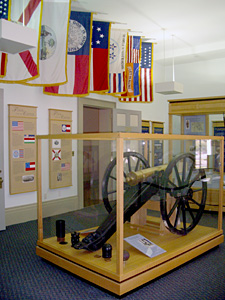 This space explores some of the major historical events that have unfolded at the Historic Capitol since 1845. Visitors can peruse archaeological artifacts from the Capitol grounds, the eight flags that have flown over the building, and the Mountain Howitzer cannon that was on the front steps for over seventy years. 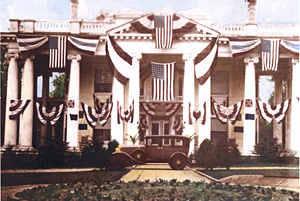 Additional exhibition space is located on the Historic Capitolגs lower level, which has housed offices, vaults, archives, storage areas, maintenance facilities, coal bunkersגeven an armoryגover the years. It was reported that soldiers were bunked in the Historic Capitol basement during the Civil War.

Exhibitions feature the architecture of capitol buildings, the selection of the design of the current Capitol structures, artistic images of the Capitolגs historic designs; and historic composites featuring Senators and Representatives.

The second floor rotunda is a great place to pause and appreciate the architecture of the Historic Capitol: the art glass sub-dome above, grand staircase below, crown molding at the top of the twenty-two foot high ceilings, and long hallways between the House and Senate chambers. The windows provide a scenic view of the Capitol grounds and Apalachee Parkway. 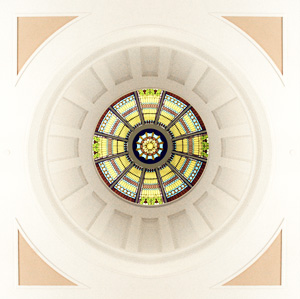 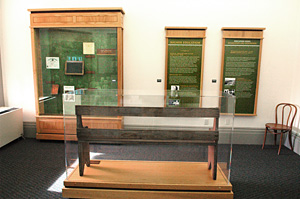 Florida’s public education system was created during the first state legislative session in 1845. Later governmental actions have further addressed complex issues such as segregation, governance, funding, training, safety, and curriculum. Learn about reforms made since the implementation of Brown v. Board of Education in the early 1970s, and view a school bench that is over one hundred years old from a one-room African American schoolhouse. 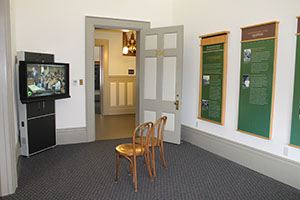 In this room, learn about Floridaגs diverse population growth through history. From some of the earliest settlers through to more recent migrant populations, find out how Florida became home to them all. 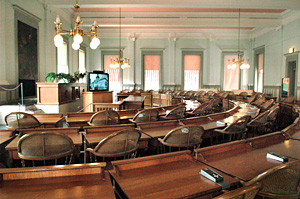 206 The House of Representatives Chamber

The restored 1902 House Chamber features high ceilings, pastel colors and classical details. Some original furnishings that date from 1903 are on display, including an original representative's desk, a pageboyגs bench, and a hall tree. The wooden rail separates the public gallery from the actual “House Chamber” with its 68 reproduction desks, original Clerkגs desk, and Speakerגs rostrum.

Groups can schedule an experience with the interactive voting program in this space. The group will debate and vote on a legislative issue that was actually considered by the Florida House of Representatives. 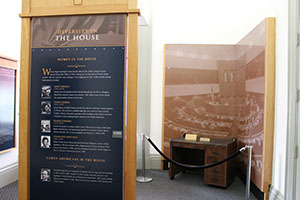 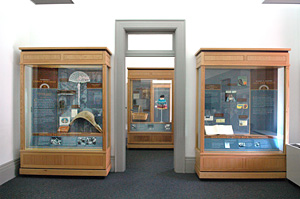 These two rooms highlight some of the ethnic, community, and interest groups who have historically struggled to become involved in the political process. Explore the historic and political legacy of African Americans, Native Americans, Cuban Americans and women. Learn about the Seminole Wars, Jim Crow laws, Florida's womenגs movements, and Cuban political exiles.

Items on display include a handmade doll donated by the Seminole Tribe of Florida, a restroom door used during segregation, and some items from the Tampa Cuban cigar industry. 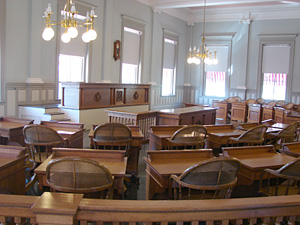 The restored 1902 Senate Chamber is furnished with thirty-two desks, dividing rail, clock, clerk's desk and Senate President's bench. In 1902 an original desk and chair cost a total of $27.50. In the 1990s these reproduction desks and chairs cost $750 apiece. On the front of each desk is a plaque with the name of the group or individual that donated funds for the desks.

The Senate Chamber is available to rent for meetings and receptions. 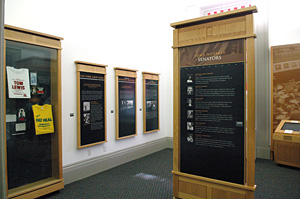 This room highlights how the Senate functions and features profiles of some notable senators and legislation. The exhibits include election items from senate campaigns, such as handbills, bumper stickers, and buttons. 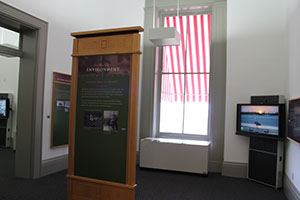 Floridaגs varied natural resources have been compromised over the years by rapid growth and development. In this room, visitors can explore some of these precious resources and how political decisions on environmental issues have affected the state throughout history. 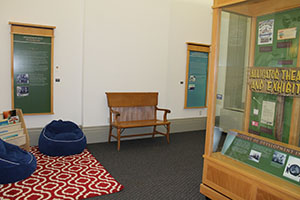 Throughout the stateגs history, lawmakers have wrestled with growth management and development issues. Florida's 20th century development and population boom brought both improvements and problems in transportation, housing, economic development, tourism, utilities, and the telecommunications industry.

This exhibit room includes a cozy reading corner where young visitors and families can curl up with a Florida book. 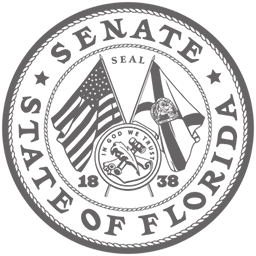 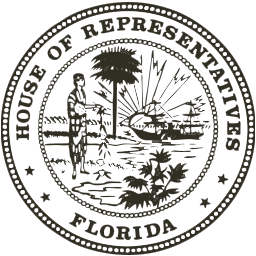